Over two years ago, Apache Beam introduced the portability framework which allowed pipelines to be written in other languages than Java, e.g. Python and Go. Here’s how to get started writing Python pipelines in Beam.

Let’s first create a virtual environment for our pipelines. Note that we want to use Python 3 because Python 2 is now obsolete and won’t be supported in future Beam releases.

Next, let’s create a file called wordcount.py and write a simple Beam Python pipeline. I recommend using PyCharm or IntelliJ with the PyCharm plugin, but for now a simple text editor will also do the job:

Please see the inline comments for an explanation of what the code does.

We can now run the pipeline:

Arguably, that’s a very simple pipeline but you get the gist. Later on, we will change the data source to read from Kafka.

By default, the so called DirectRunner runs your pipeline. The DirectRunner is only intended for local development purposes. It’s very slow and does not support distributed execution.

Let’s run the same pipeline with the Flink Runner which will runs the pipeline (you guessed it) on top of Apache Flink:

What happens when you run your script with the --runner argument? Beam will look up the Runner (FlinkRunner) and attempt to run the pipeline. By default, this will download the Flink Runner JAR which contains the Beam JobService. The JobService will receive the pipeline and submit the pipeline to a Flink cluster. If you do not specify a cluster address via --flink_master, a local Flink cluster will be started.

If you want to test the Docker-based execution locally, you can specify the following:

The Beam community publishes Docker images for all releases which are used by default. You can build / specify a custom image.

As a next step, let’s read some data using Beam’s KafkaIO. Oh no! Turns out, there is no native Kafka connector in the Python API. No problem, we can use KafkaIO in from the Java SDK:

To understand what will happen when we run this pipeline, have a look at this image: 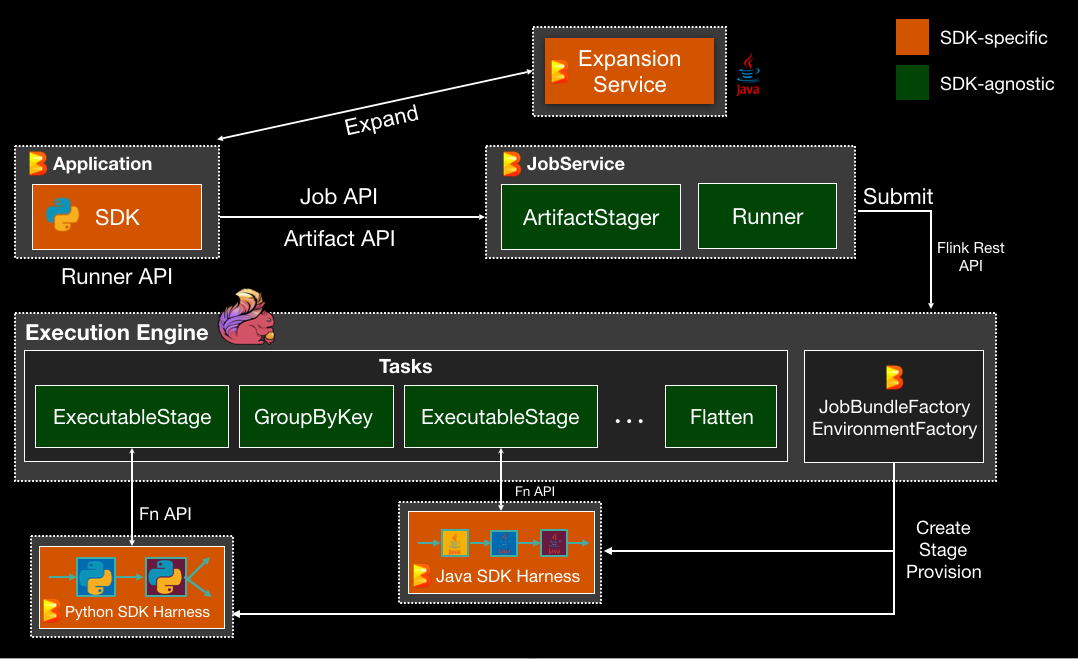 When we run the Python script, the pipeline is constructed. During this, a lookup to the ExpansionService is performed to resolve ReadFromKafka / WriteToKafka. Once the pipeline has been assembled, it is submitted to the JobService which also receives any required artifacts (e.g. Python libraries). The Runner then submits the pipeline against a Flink cluster.

The good news is that you normally do not have to worry about this process. FlinkRunner, as part of the Python SDK, abstracts away a lot of the complexity.

6. Reach out to the Beam community

That’s it! For more information, check out the Beam documentation. Still stuck? Feel free to reach out to the Beam community.