Let’s have a look at what makes a good community, how communities are structured, and how to build them. I’ll also try to point out common pitfalls when developing communities.

Why should you build a community?

The following are good reasons to build an open-source community:

Why shouldn’t you build a community?

There a legitimate reasons why building a community might not be a good idea. Let’s have a look at some of the counter-arguments:

What about existing communities?

Do you really need to start a new community? Maybe there is already a community that would fit your needs. Think about joining one. Building a community from scratch can be much harder than joining an existing one. You can start making an impact in the project and focus on the things that matter most to you.

The 4 Pillars of a Successful Open-Source Community

For a strong open-source community you need the following ingredients: 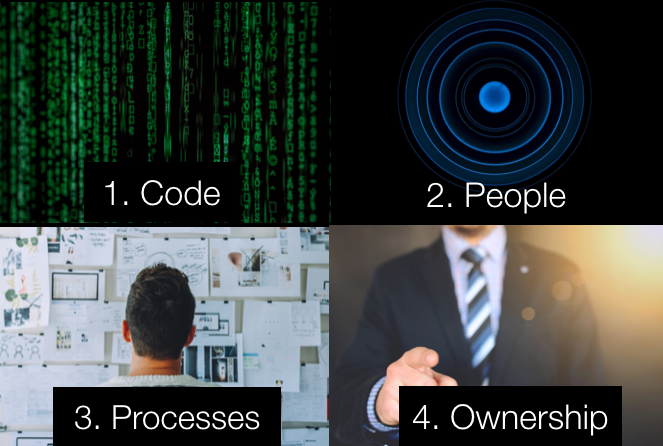 Why code? A community can only evolve about a meaningful piece of software. If you don’t provide value to people, nobody is going to care about your project. So think about the existing open-source software and how you will provide value to motivate others to join and participate.

You should ask yourself:

Code aside, of course a community is all about the people. If you look up who is part of an open-source community, you usually find this definition:

In reality, things are much more complicated:

Take software developers as an example. They are part of the community but they are rarely employed by the project — the open-source funding dilemma. Instead, they work at companies whose corporate goals vary. As a project you need to acknowledge this.

Don’t expect that everyone can spend the same amount of time in the community, but still give everyone a chance to participate.

Do not rely on a single person to maintain a project, build in some redundancy by having a second maintainer or at least document things well. Otherwise you have a single point of failure for your project. Maintainer burnout is a very real thing, so acknowledge the work of developers and find a way to balance the work the developers have to do.

Recognize that your community can span outside the code domain. This makes your community more diverse and can significantly grow it. Consider the following roles:

What would be a good example of a things done by the critical mass?

How do you find a critical mass? To give you an idea, here’s a great quote by Jan Lenhardt:

I tried to be involved with every thread on the mailing list, showing exemplary behaviour, being nice to people, taking their issues seriously and trying to be helpful overall. After a while, people stuck around not to only ask questions, but to help with answering as well, and to my complete delight, they mimicked my style.

The critical mass is the role model of the community. It all starts with a few people but it grows over time.

All these processes should be formalized and documented as much as possible. This not only helps the existing community but also allows others to understand how the community works and whether it is safe to rely on the produced software.

Ownership is often associated with the license of the code, so let’s review some common open-source licenses:

Licenses are important for communities because they set the legal framework for contributions. They also influence the type of communities which built around them because they allow for different use of the software.

For example, the Apache license doesn’t require you to contribute back if you make changes and distribute/sell them. That may seem bad for the community but it is also a great way to grow the adoption of the code and help the community.

For a community to grow, contributing back upstream and engaging with the community is necessary. There should be an incentive for individuals or companies to stay relevant in the project and participate in it. If you make it easy for people or companies to do that, the license may be secondary.

Ownership is not only limited to the license. It also applies to:

The two most prominent models are:

Owned by a single person / company

Often these projects are owned and led by a “Benevolent dictator”. Prominent examples are Guido van Rossum (Python) and Linus Torvalds (Linux).

There are pros and cons to this model. For one, it’s easy to stay in control and keep the project focused. On the other hand, the dictator can become the bottleneck of the project which will slow down its growth. This happened to Linux in the early 2000s when Linus Torvalds was still reviewing and approving all incoming changes.

Famous foundations for open-source are:

In my eyes, the ASF and the FSF are the most open although they are quite different in terms of defining freedom in code. They both accept monetary donations, but the only way to influence projects is by gaining merit in them.

What does that mean? It means that you based on your contributions to the project you will be granted responsibility (comittership) which gives you power in the project. At the ASF, there is an incubation process which teaches and probes new projects on good behavior inside Apache.

At the Linux and Python software foundation there is also a merit-based model, but contrary to the ASF or FSF, you can also donate money to have a saying in the project’s decisions.

In the end, it doesn’t matter what model you choose but it does look like the open governance model in software foundations has the most potential to grow a large community.

A good community is one which develops a good standpoint in all four domains: Code, People, Processes, and Ownership (COPP).

The mindset for success

We have learned about the 4 pillars for a successful open-source community (COPP). In addition, here are 5 important principles which you should watch out for in the course of building a successful community:

With a critical mass, you can build the foundation for your community. Your critical mass might be small to begin with, so keep an eye open for potential new members. Remember, relationships are the core of every strong community.

This post is based on talks given at Fossbackstage 2020 and Berlin Buzzwords 2020.